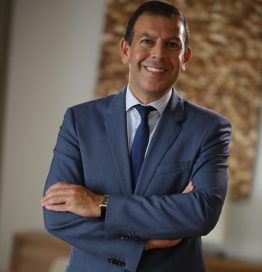 Mr. Homayoon (Hom) Parviz is the newly appointed General Manager at Hyatt Regency Belgrade since April 2012, responsible for overall operation of the Hotel. Mr. Parviz family background originates from northern part of Iran on the border of Azerbaijan from the city of Tabriz, however he was born in Tehran and moved to the UK after the Iranian revolution in 1979. He completed his secondary education back in Iran, High School studies at Davis Lang & Dick Tutorial College – London, and then finally a short term course of Business Administration at American School of London, while already working part time and where he began his hospitality career.

Prior to this assignment, his responsibilities included operating the Hyatt Regency Bishkek & Hyatt complex in Azerbaijan consisting of Park Hyatt and Hyatt Regency Baku. His career with Hyatt International Corporation began in 1994, with various missions and transfers taking him to Turkey, Azerbaijan, Spain, Oman, Australia, Kyrgyz Republic and now the wonderful city of Belgrade.